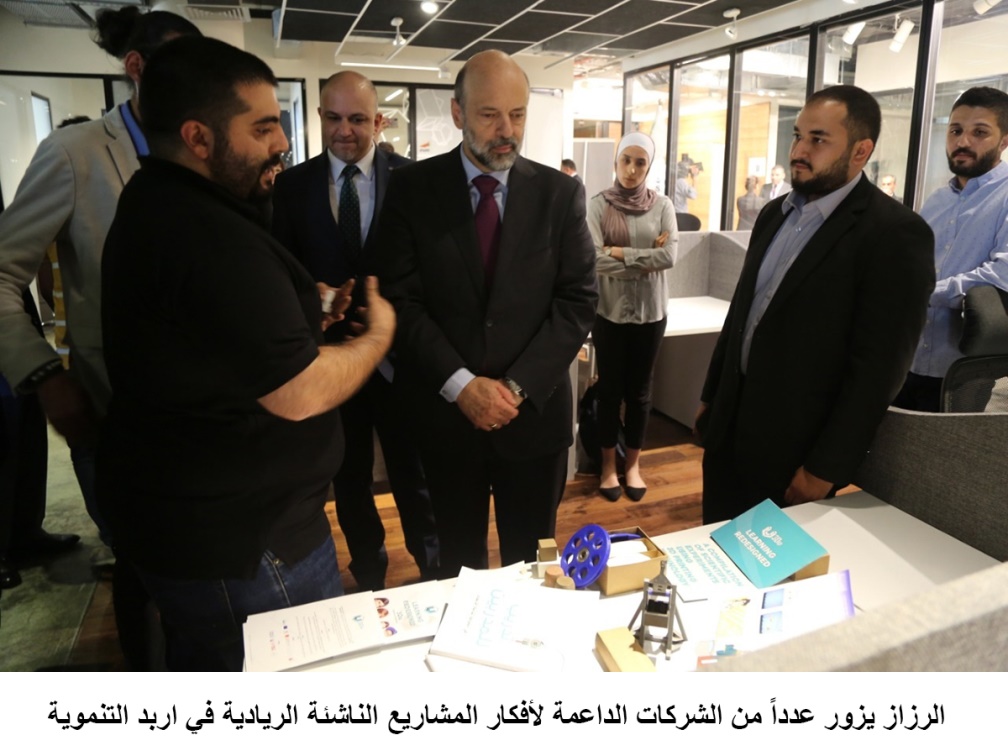 -- Prime Minister Omar Razzaz on Tuesday visited a number of companies which support the ideas of leading start-ups in the Irbid Development Zone.

During the visit, Razzaz looked first hand at the "Shamal Start" project aimed at supporting youth and start-up companies in the field of innovation, highlighting success stories, and spreading the culture of pioneering action.

The Shamal Start project is the first business incubator in the north funded by the European Union and the Luminus Education Group in partnership with the Royal Society and iPark.

The Prime Minister visited the Second Step for Software Development company, owned by the Emirati YAS Holding Group, and met with a number of the company's Jordanian programmers who worked on software used in the health and education sectors in the United Arab Emirates (UAE).

He also visited Extensya, a company that offers business process outsourcing services, and met with a number of young employees working in support services and call centers. The company provided job opportunities for youth in the northern region within the telecommunications sector.

Addressing youth working in these companies, Razzaz voiced the government's pride in the capabilities of young people in the Kingdom, noting that these citizens are a key asset to enter the fourth industrial revolution to contribute to the development process in the Kingdom.

He pointed out that the Irbid Development Zone, which saw quality investments in the field of information technology, is a positive example of Jordan's promising economic future, noting that it provides good job opportunities for young men and women.

The prime minister lauded the UAE company which "believed in the competence of the Jordanian youth," and worked on attracting fresh graduates and training them. He hailed the company's high productivity, unique education, and drive for work.

During the visit, Razzaz was briefed on investments in the Irbid Development Zone and the ICT sector.

CEO of YAS Holding Group, Rashid al-Ridini said about 90 percent of information systems in the UAE schools were developed by Jordanian programmers.

"We are proud of Jordanian youth in the field of software," he added, pointing to the strong educational system in Jordanian universities.