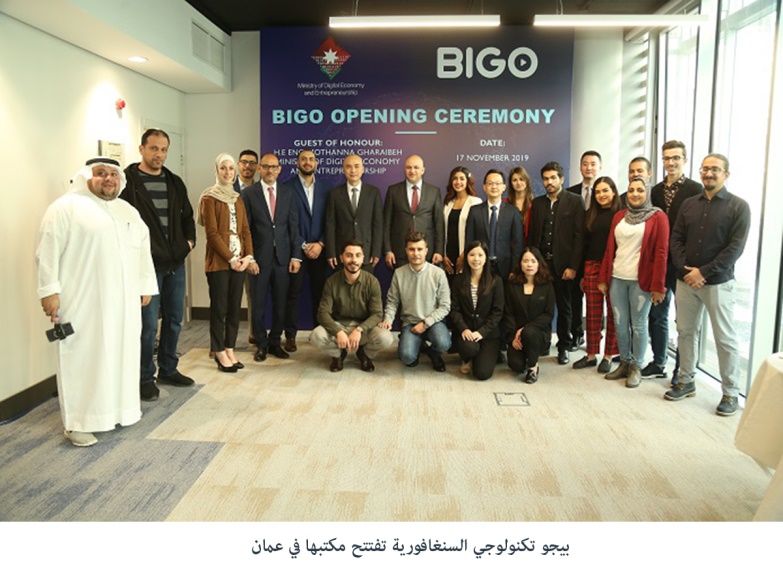 The company said in a press release that BIGO’s first office in Jordan will serve as an additional regional hub to interact and engage with users and stakeholders, ensure a high-tech corporate presence in Jordan, and advance AI skills among Jordanian youth. It will improve products, and increase employment opportunities for technology professionals within the country, it added.

Gharaibeh, said in opening remarks that "BIGO has made the first step in fulfilling their commitment to Jordan, and we look forward to their future investment in the upskilling and hiring of technology and AI professionals in Jordan."

"This investment aligns well with initiatives in Jordan such as the ‘One Million Jordanian Coders’ program, which will bring Jordanians free three-month training sessions and online courses in coding and internationally-recognized certification. As Jordan advances towards our digital future, we are enthusiastic about the role that visionary technology companies such as BIGO will play," the minister said.

BIGO currently has over 69 technical patents and over 414 patents are under the process of application. As a fast-growing Singapore company, BIGO now has five R&D centres around the globe, and employs over 250 people in the MENA region alone. Worldwide, BIGO has more than 400 million monthly active users across its applications and services, a significant percentage of whom are in the MENA region, the statement said.

The Jordanian government has been a keen supporter of BIGO for its plan and presence both in the Kingdom and across the wider region, it said.

Earlier this year BIGO hosted Gharaibeh at its headquarters in Singapore, where discussions centred on the expansion possibilities in Jordan, and upskilling of youth in preparation for the fourth digital revolution.

"At BIGO, we strongly believe that it is our responsibility to invest in the future wherever we operate. Jordan is on a quest to become the digital hotspot in the region. Our expertise in AI will help support Jordan’s vision and assist in developing an environment that nurtures and enhances digital skills and capabilities to build a better future," Mike Ong said.

For BIGO, the Middle East region is ripe with opportunity for the consumption and development of its applications. It will also assist in developing the skills and talent of Arab youths and empower them to conceptualize and build a more productive future.

Jackson Liu said: "We believe that establishing the BIGO office in Jordan is a strategic move due to the diversity on offer, in relation to language skills, cultural similarities to that of the region and an IMF classification of ‘Highly Developed’. We are committed to investing and developing human capital, and we have developed a comprehensive recruitment plan. Our objective is to focus more on hiring technology professionals so we can contribute to the vision of Jordan."

The office in Jordan is the second BIGO office in the Middle East-North Africa (MENA) region after Egypt. The company has earlier announced plans of hiring 50 AI experts to be based in Jordan and serve the region.