Ministry of Foreign Affairs and Expatriates 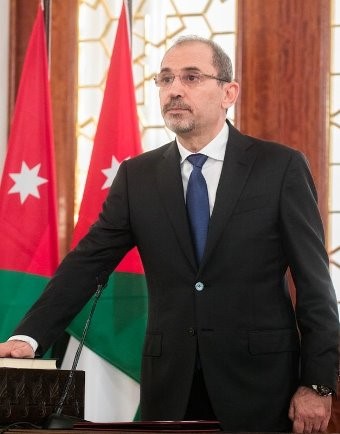 The Minister HE Dr.Ayman Hussein Abdullah Al-Safadi
Place and date of birth Born in Zarqa in 1962
Current Position Minister of Foreign Affairs and Expatriates

Qualification
Holds a bachelor's degree in English literature from Yarmouk University
MA in International Media from the University of Baylor, Texas, USA
Important positions he previously held:
Advisor to His Majesty King Abdullah II
Editor in-charge of the UAE-based newspaper “Al Etihad”
Editor-in-chiefand columnistin “Al-Ghad” daily newspaper
Officialspokesperson at the United Nations Mission in Iraq (UNAMI)
Director General of the Jordan Radio and Television Corporation
Editor-in-chief of the Jordan Times and a political columnist in it
Director of Media Department at the Royal Court
Media Secretary to His Royal Highness Prince Hasan Bin Talal
A writer and television correspondent in Jordan for many prestigious Arab and international media agencies
Served as a board member of the Jordan Radio and Television Corporation, the Supreme Council of media, the Arab Union for Television Broadcasting (Vice President), the Arab Satellite channels Coordinating Authority (president), the Jerash Festival for Culture and Arts, and the Jordan River Foundation
Deputy Prime Minister and Minister of State
Decorations: Independence Medal of the second degree

General Information
The Ministry of Foreign and Expatriates Affairs was established on the 6th of August 1939. The Ministry endeavours to achieve the objectives of the Jordanian foreign policy and to protect the best national interests inside Jordan and abroad; relaying on the sophisticated and rigorous institutional approach, which commits to directives and legislation by means of collective action
The Ministry’s objectives can be summarized in the following
Draw the Kingdom’sforeign policy and follow up on its implementation, in accordance with directives issued to that end
Represent the Kingdom in other countries and in international and regional organizations
Organize the Kingdom’s ties with states and organizations internationally and regionally, as well as sponsor and follow-up on political, economic, cultural and other relations with them Organize relations betweenendorsed foreign delegations in the Kingdom with Jordanian officials and civil parties Develop and study treaties and agreements with states and organizations regionally and internationally, and adopt the necessary measures to implement and observe them, as well as continue their implementation in cooperation and coordination with the concerned parties
Manage negotiations with states and organizations regionally and internationally; in cooperation and coordination with the concerned parties and in line with the Kingdom’s policy and interests
Participate in the Kingdom’srepresentation at international conferences
Safeguard and protect interests of Jordanians abroad
The Ministry performs these duties through a qualified staff, in addition to fifty-four embassies, two permanent missions, four consulates and one representative office
Contact Information
City
Amman Address
Amman, Queen Alia Airport Street Website
http://www.mfa.gov.jo
Email
mofa@fm.gov.jo Telephone
(+962-6)-5735160-5735150 Fax
(+962-6)-5733176
PO Box
35217 ZIP Code
11180
The Minister: HE Dr.Ayman Hussein Abdullah Al-Safadi