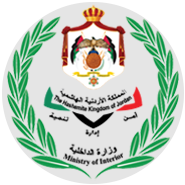 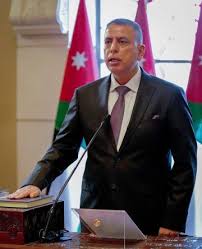 Secondary School in Amman.
Bachelor of Law from Baghdad University in 1969.

Diploma of the International Institute of Public Administration, Paris, 1974.

About the Ministry of Interior:

The establishment of the Ministry of Interior coincided with the formation of the first central government in Trans Jordan in 1921.  Over the past eight decades, the Ministry’s name was linked with the process of building the modern Jordanian state institutions, the task of preserving security and public order, and providing the best service to citizens in urban, rural and Bedouin areas.

Like other state institutions, the Ministry of Interior kept abreast with the social and economic development of the country, forming the framework through which Jordanian innovative, administrative and legal potential have interacted leading to the achievement of the best form of the modern state that is based on the sovereignty of law and respect of rights of individuals and groups.

In 1931, the Ministry of Interior acquired its naming and assumed its vast and various tasks, which, in addition to its main task of preserving security and public order, included protecting lives and public and private property, and providing services.

Supervision of projects and programs:

One of the royal initiatives of His Majesty King Abdullah II bin Al Hussein was to assign the governors the task of following up and supervising developmental projects in the governorates.  This was done in order to develop and improve all types of services provided to citizens and with the aim of raising the individual’s standard of living, as well as investing the legal and administrative authorities granted to governors through the laws, regulations and instructions in effect. This is done through:

1.        Preparing a suitable environment for all levels of investment and strengthening cooperation between the private and public sectors.

2.        Following up on the implementation of developmental projects and their level of compliance with set timelines.

3.        Addressing causes of failure of developmental projects through the governors using all legal and administrative and otherwise accountability.

4.        Preparing capital budgets for governorates in cooperation with executive and investment councils leading to the preparation of a capital budget that guarantees the fulfillment of citizens’ needs in their different residential locations.

Under His Majesty King Abdullah II bin Al Hussein, the Ministry continues its efforts to maintain and strengthen its accomplishments by:

·            Entrenching modern administrative concepts on the basis of facilitating matters for citizens.

·            Raising the level of efficiency and productivity of Ministry employees.

·            Expanding the authorities of governors in the field and directors at headquarters for the sake of sustainable development and the implementation of developmental projects.

·            Keeping up with the public national policy of encouraging investment and tourism.

·            Facilitating the arrival and residency of Arab and foreign investors in the Kingdom.