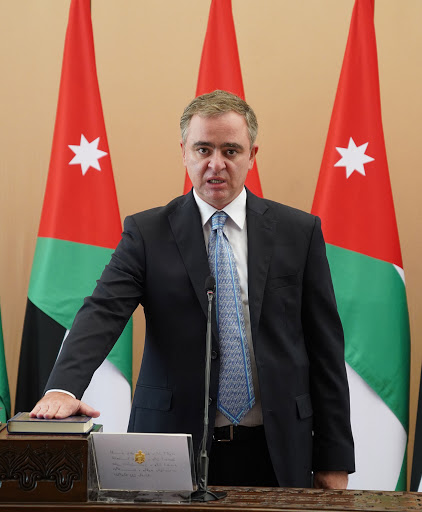 ·     PhD in Political Sciences from the School of Politics and International Relations, University of Kent, UK, 2003.

·     M.A in Political Sociology from the University of Kent.

·     Bachelor's degree in History from Mu'tah University in Jordan.

The most important positions he held

·     Director of Strategic Studies at the Royal Hashemite Court.

·     Researcher at the Center for Strategic and International Studies in Washington, DC, and at “The Foreign Affairs Committee” of the US House of Representatives.

In the academic field, in addition to his membership in the International Scientific Committee at the World Values ​​Survey, he recently published several studies on extremism, including a study on extremism among youth in Jordan with the Center of the Study of Violent Extremism at Georgetown University, another on extremism in Jordan and the countries of the region, and on Syrian asylum. Among his publications in English are "Islam, Muslims and Liberal Democracy" from Lambert's academic publications 2010, and a paper entitled "The Meaning of Democracy: How Do Arabs Think?" In the Journal of Democracy in Washington, October 2010. And a paper in the book entitled "The Impact of Satellite Channels on the Arab Public Opinion," in the New Arab Media book, Ithaca Press, 2010.

Regulating the youth’s capabilities and investing them in a manner that best achieves their active participation in sustainable human development, and entrenching the values of teamwork and volunteerism.

Encouraging the youth to exercise leisure sports for the purpose of developing physical fitness and self-control.

The  Duties and Authorities:

1. Setting the national policy for sponsoring youth and setting plans and programs necessary to achieve the policy in cooperation and coordination with the parties concerned, for the purpose of unifying efforts and employing the various capabilities.

3. Establishing and supervising youth centers, and setting programs and plans capable of achieving their objectives in accordance with directives set by the Council for this purpose.

4. Sponsoring youth with special needs, regulating the investment of their capabilities and providing them with opportunities to exercise youth activities.

5. Highlighting the capabilities of gifted and talented youth, and adopting plans and programs capable of achieving them.

6. Representing the Kingdom in Arab and international parties and organizations concerned, both official and local ones, organizing youth exchange, and signing agreements with them.

8. Determining the fees for services provided by the Council in line with instructions issued for this purpose.

9. Forming committees that it deems necessary for assisting it in performing its duties.

(13) sports complexes in governorates and districts.

(7) youth hostels spread throughout the Kingdom.

The Council provides financial and material support for (281) sports, cultural, social clubs throughout the Kingdom.

The Council issued (45) books in a series of youth cultural education regarding our national, pan-Arab and urban principles and the skills of modern life. The Council maintains the policy of issuing this series of books.

The Council has a special magazine (The Youth Magazine), which is a youth forum concerned with youth issues, and is distributed to youth in Jordan and abroad.

An artistic group made of men and women concerned with the local Jordanian culture was qualified and it represented Jordan in a number of youth gatherings abroad and has achieved honorable results.

The Council signed a number of bilateral protocols and agreements with several brotherly Arab countries and other friendly countries.

The Council has extraordinary activity in cooperation with non-governmental international and local organizations concerned with youth issues.

The Council activates the Law for the Youth and Sports Activity Support Fund.